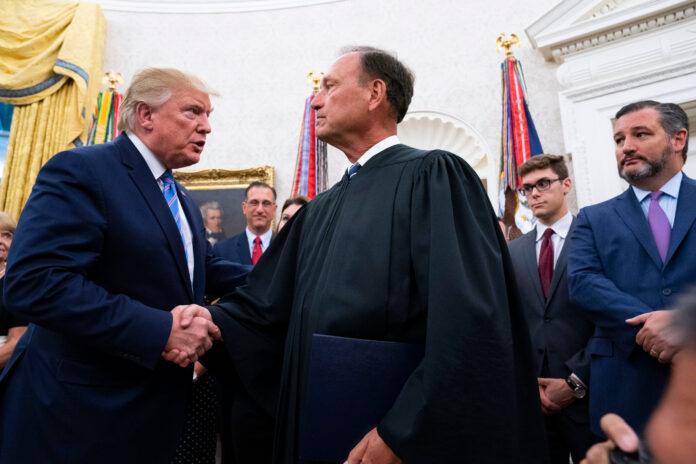 Through various mixes of factual distortions, tendentious wording, and uncritical parroting of misleading attacks by liberal critics, some (but not all) reporters insinuate that Alito is a slippery character who will say whatever senators want to hear, especially by “distancing himself” from past statements that (these reporters imply) show him to be a conservative ideologue.

I focus here not on the consistently mindless liberal hysteria of the New York Times’ editorial page. Nor on such egregious factual errors as the assertion on C-SPAN, by Stephen Henderson of Knight Ridder Newspapers, that in a study of Alito’s more than 300 judicial opinions, “we didn’t find a single case in which Judge Alito sided with African-Americans … [who were] alleging racial bias.” This, Henderson added, is “rather remarkable.”

What is remarkable is that any reporter could have overlooked the at least seven cases in which Alito has sided with African-Americans alleging racial bias. Also remarkable is the illiterate statistical analysis and loaded language used by Henderson and Howard Mintz in a 2,652-word article published (in whole or in part) by some 18 newspapers. It makes the highly misleading claim that in 15 years as a judge, Alito has sought “to weave a conservative legal agenda into the fabric of the nation’s laws,” including “a standard higher than the Supreme Court requires” for proving job discrimination.

The systematic slanting — conscious or unconscious — of this and many other news reports has helped fuel a disingenuous campaign by liberal groups and senators to caricature Alito as a conservative ideologue. In fact, this is a judge who — while surely too conservative for the taste of liberal ideologues — is widely admired by liberals, moderates, and conservatives who know him well as fair-minded, committed to apolitical judging, and wedded to no ideological agenda other than restraint in the exercise of judicial power.

Here are some other examples of slanted reports about Alito, not including those noted in my November 7 and 21 columns:

A December 3 Washington Post front-pager by Charles Babington stressed Alito’s supposed effort to “distance himself” from two 1985 documents in which he had asserted that (among other things) “I am and always have been a conservative” and “the Constitution does not protect a right to an abortion.” Babington added that this distancing “may expose him to accusations of insincerity or irresolution, advocates said.”

Indeed. Articles such as Babington’s have fueled a clamor about Alito’s supposed “credibility gap” by liberal groups and attack-dog senators like Edward Kennedy of Massachusetts. Liberal editorialists and columnists have joined in.

Such suggestions of insincerity are not based on anything that Alito has said. They are based on misleading characterizations by reporters of what senators say Alito has said in private meetings with them. Needless to say, some of these senators are spinning their own agendas.

One who seemed to play it straight was California Democrat Dianne Feinstein, a good bet to vote against Alito. She reported that Alito had told her: “First of all, it was different then…. I was an advocate seeking a … political job. And that was 1985. I’m now a judge…. I’m not an advocate; I don’t give heed to my personal views. What I do is interpret the law.” Added Feinstein: “I believe he was very sincere.”

Feinstein did not say that Alito had implied that his 1985 application had been anything other than a sincere expression of his beliefs at the time. And an administration supporter with knowledge of the private meetings tells me that Alito has made clear to senators that he stands by what he wrote then.

Alito has also, of course, told senators that the 1985 documents are less relevant than his 15-year record of apolitical judging and respect for precedents — especially precedents that (like Roe v. Wade) have been reaffirmed repeatedly since 1985. Nothing “insincere or irresolute” about that.

The December 3 Babington article stressed that Alito had written in 1985 that he was ” ‘particularly proud’ of fighting affirmative-action programs.” But Alito had not used the words “affirmative action.” He had expressed pride in opposing “racial and ethnic quotas.” (Babington noted this in a second reference, without making it clear that this was all that Alito had said.)

The distinction is important. The vast majority of Americans share Alito’s opposition to quotas. By falsely suggesting that Alito had condemned all forms of “affirmative action” — a broader and more benign-sounding phrase — Babington added a we-don’t-like-him spin.

In a December 1 Washington Post front-pager, Amy Goldstein and Jo Becker found it remarkable that Alito had “referred to a doctor who performs [abortions] as an ‘abortionist’ and railed against a … decision that had struck down an ordinance that he said was ‘designed to preclude the mindless dumping of aborted fetuses into garbage piles.’ ”

“Railed against” is, of course, a phrase often used to imply ranting and raving — the antithesis of the thoughtful analysis in the Alito memo. And that colorful quote about “mindless dumping of aborted fetuses”? Those were not Alito’s words, as the reporters asserted. He was dutifully quoting the city’s explanation of its own ordinance.

A December 5 New York Times front-pager by David Kirkpatrick focused on how “Judge Alito has often invoked his father’s legacy to help deflect questions from skeptical Democrats.” Portions of the article can be read as reflecting well on Alito. But it also contains strange and utterly unsupported insinuations that Alito is perhaps being insincere in touting his father as a role model — even that he may have fabricated stories about his father to make himself look good.

“Still,” Kirkpatrick writes, “some colleagues and friends of the elder Mr. Alito, who died in 1987, said they had never heard some of the stories his son has recounted,” including a story that his father had “in college once defended a black basketball player from discrimination on the team.”

I read this as implying that Alito, to pad his racial-sensitivity resume, had perhaps made the whole thing up. So I was surprised to find that Kirkpatrick had dug up hard evidence that this story was true — and had cited it for the benefit of those readers who managed to make it to his 16th paragraph. The evidence is a 1935 editorial in the campus newspaper denouncing the college for benching the black player for a game with a segregated teachers college. Alito’s father was editor-in-chief of the newspaper.

A December 6 Boston Globe front-pager by Michael Kranish breathlessly reported that Alito was noted as “present” when the 12-judge U.S. Court of Appeals for the 3rd Circuit declined to rehear a three-judge panel’s decision in the case of one Larry Kopp, in 1992.

Why is this front-page news? Well, reports Kranish, Alito had signed Kopp’s bank fraud indictment five years before, as U.S. attorney for New Jersey. And on taking the bench, he had promised not to participate in the case. So if he participated, he broke his promise!

One problem: It seems quite unlikely that Alito did participate. Most petitions for rehearing simply die automatically without a vote in the 3rd Circuit, because usually no judge requests a vote. And court clerks often mark judges “present” at such sessions whether they vote or not, or are recused.

Then there is the little problem with the headline. It reads: “Alito’s policy on recusals is questioned.” But the article identifies nobody (other than Kranish) who has questioned Alito’s supposed role in the Kopp case.

To be sure, many critics have questioned Alito’s participation in other cases — without citing a shred of evidence of any conflict of interest, ever. That’s a story for another day.

Meanwhile, lest this column be dismissed as pro-Bush propaganda, I hereby associate myself with a comment by Walter Murphy, the distinguished constitutional scholar who was Alito’s thesis adviser at Princeton University:

— Stuart Taylor Jr. is a senior writer and columnist for National Journal magazine, where “Opening Argument” appears. His e-mail address is staylor@nationaljournal.com.